People who still visualise archaeologists as antiquarians collecting old objects are in for a surprise! Run jointly by French institutions and those of their host countries, major excavation sites abroad are genuine laboratories which attract researchers from all over the world and in all different disciplines. 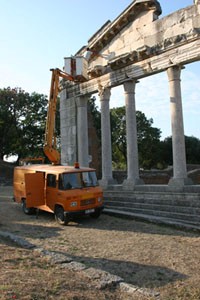 At Madâ’in Sâlih, an ancient fortress town in the middle of the desert in Saudi Arabia, alongside members of the SCTA (Saudi Commission for Tourism & Antiquities), scientists from the CNRS (French National Centre for Scientific Research), the University of Paris 1 and the French Institute of Middle Eastern Archaeology are busy at work in an area of 1400 hectares. This Nabataean site, now a UNESCO World Heritage Site, dating from the 3rd century BC, is the subject of a prestigious mission, which is co-directed by a professor of the University of Hâ’il and is attracting many sponsors. It has been awarded the archaeology prize of the Simone and Cino del Duca Foundation (under the auspices of the Institut de France), and is giving rise to conferences, seminars, exhibitions and publications.

The medieval site of Lalibela in Ethiopia offers another challenge. The site consists of churches hewn into the rock, some of which are still in use! This excavation, directed by two researchers from the CNRS based at the Centre Français des Etudes Ethiopiennes in Addis Abeba, includes highly involved Ethiopian partners and many French institutions including INRAP (French National Institute for Preventive Archaeology) with funding from the ANR (French National Research Agency). There is a permanent exhibition designed for local residents and tourists at the World Heritage Center in the town of Lalibela, where guides are trained by the researchers.

In the ancient Greco-Roman town of Apollonia in Albania, the Archaeological Institute of Tirana, the French Schools of Athens and Rome, the University of Lyon 2 and the CNRS are carrying out the restoration of the mosaics of a Roman house and the development of the agora. Students from all over the world come to study at this teaching site. An exemplary excavation according to Jean-Michel Kasbarian, head of the Human Sciences and Archaeology Centre at the Ministry of Foreign and European Affairs: “A good mission is one that promotes a multidisciplinary approach, innovation and cooperation between universities, brings the largest possible number of partnerships into play, and has a significant impact on science and technology. Archaeology is one of the most multidisciplinary sciences and excavation sites bring in geneticists who study ancient DNA, biologists, cartographers, economists, historians, geophysicists, and all researchers in the life sciences.” The Quaternary and Prehistory Mission in Indonesia, for instance, not only attracts anthropologists and prehistorians, but also geologists and zoologists. The international team includes many young researchers and doctoral students, as well as Indonesian scientists trained in France thanks to the longstanding cooperation between the Indonesian Centre for Archaeology and France’s Muséum National d’Histoire Naturelle.

These operations provide France with an opportunity to export its know-how. Like mathematics, archaeology is in fact one of the showpieces of French research and many countries are keen to collaborate. This year, as in 2011, the Ministry of Foreign and European Affairs is continuing to support French archaeological missions worldwide. The advisory commission for archaeological research abroad, made up of archaeologists and specialists from the Institut de France, the CNRS, major French cultural or research institutions (Louvre, Muséum National d’Histoire Naturelle, universities) and foreign ones (German Archaeological Institute, National Museum of Mali), is responsible for selecting the best projects. 164 missions have been confirmed for 2012, including 11 new operations in Oman, Peru, Mexico, Azerbaijan, Ukraine, Bulgaria, Morocco, Tunisia and three in Turkey.

Archaeological missions are also a means for France to develop its relationships of cooperation with other states. For instance, the Roman site of Piramagrun in Iraq, a former crossroads for caravan routes in the territory of Kurdistan, has just reopened thanks to a partnership between the CNRS and the Department of Antiquities of Sulaymaniyah, with the approval of the State Board for Antiquities and Heritage of Baghdad. The mission has acted as a catalyst for restarting significant research, which is fundamental for archaeology in this region, but which had been put on standby for around 20 years. The authorities and the local populations are involved in these operations, which should also have an impact on the local economy through the development of the sites, infrastructure development, and the sharing of knowledge of the region and of its culture. “The site is being considered within its environment,” stresses Jean-Michel Kasbarian. “We are studying a whole, a system, and always from the standpoint of a scientific question into which a cultural and historic investigation is made, giving us a better understanding of the past and the present”. Archaeology is for passionate people and these fascinating sites draw them all together, irrespective of nationality!