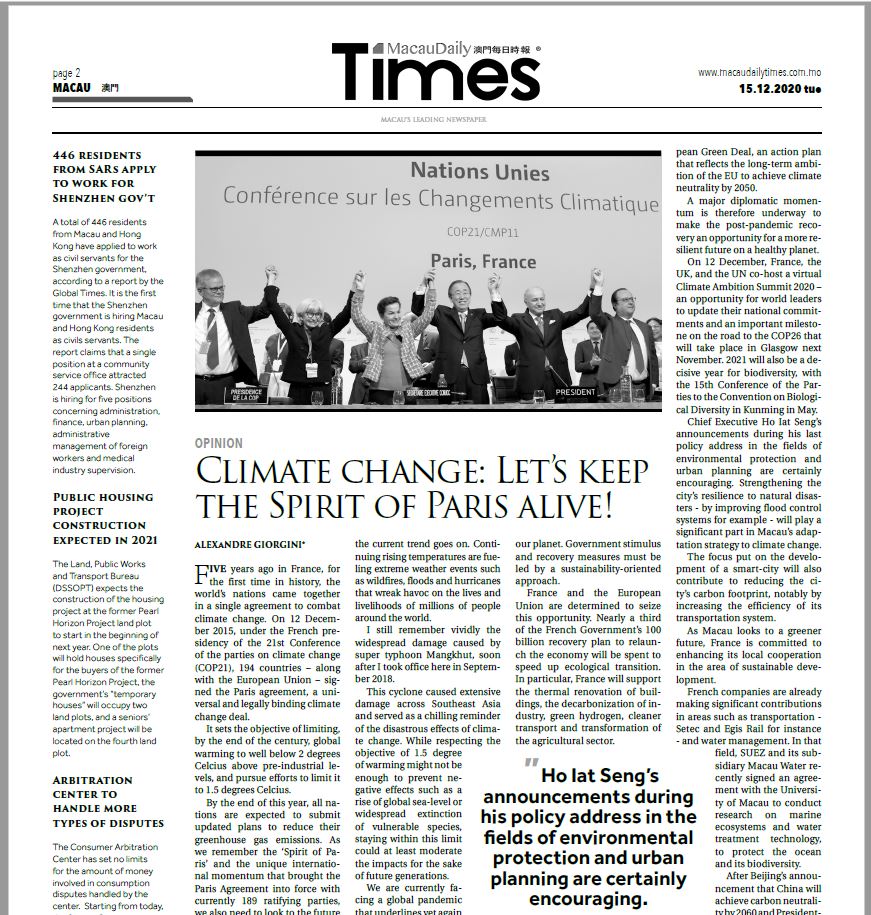 Five years ago in France, for the first time in history, the world’s nations came together in a single agreement to combat climate change. On 12 December 2015, under the French presidency of the 21st Conference of the parties on climate change (COP21), 194 countries – along with the European Union – signed the Paris agreement, a universal and legally binding climate change deal. It sets the objective of limiting, by the end of the century, global warming to well below 2°C above pre-industrial levels, and pursue efforts to limit it to 1.5°C.

By the end of this year, all nations are expected to submit updated plans to reduce their greenhouse gas emissions. As we remember the ‘Spirit of Paris’ and the unique international momentum that brought the Paris Agreement into force with currently 189 ratifying parties, we also need to look to the future and make sure we hold ourselves to the commitments we made 5 years ago.

Time is already running out. 2020 is on course to be the warmest year ever recorded, according to the World Meteorological Organization. The UN Environment Programme predicts that global warming will reach 4°C by the end of the century if the current trend goes on. Continuing rising temperatures are fuelling extreme weather events such as wildfires, floods and hurricanes that wreak havoc on the lives and livelihoods of millions of people around the world.

I still remember vividly the widespread damage caused by super typhoon Mangkhut, which battered Hong Kong soon after I took office here in September 2018. This cyclone caused extensive damage across Southeast Asia and served as a chilling reminder of the disastrous effects of climate change. While respecting the objective of 1.5 degree of warming might not be enough to prevent negative effects such as a rise of global sea-level or widespread extinction of vulnerable species, staying within this limit could at least moderate the impacts for the sake of future generations.

We are currently facing a global pandemic that underlines yet again the importance of science, solidarity and decisive actions in the wake of global threats. The drop in greenhouse gas emissions due to the coronavirus-related global economic downturn is only temporary and will not be enough to reverse the trend. However, recovery from the pandemic could be humanity’s chance for a reset to save our planet. Government stimulus and recovery measures must be led by a sustainability-oriented approach.

France and the European Union are determined to seize this opportunity. Nearly a third of the French Government’s €100 billion recovery plan to relaunch the economy will be spent to speed up ecological transition. In particular, France will support the thermal renovation of buildings, the decarbonization of industry, green hydrogen, cleaner transport and transformation of the agricultural sector. Simplified installation measures have been designed to facilitate foreign investment into the green economy, a good opportunity to grasp ! At the European level, Member States already agreed to spend 30% of the upcoming EU budget to fight climate change during the 2021-27 period, on top of the 2019 European Green Deal, an action plan that reflects the long-term ambition of the EU to achieve climate neutrality by 2050.

A major diplomatic momentum is therefore under way to make the post-pandemic recovery an opportunity for a more resilient future on a healthy planet. On 12 December, France, the UK and the UN co-host a virtual Climate Ambition Summit 2020 – opportunity for world leaders to update their national commitments and important milestone on the road to the COP26 that will take place in Glasgow next November. 2021 will also be a decisive year for biodiversity, with the 15th Conference of the Parties to the Convention on Biological Diversity in Kunming in May.

Chief Executive Carrie Lam’s announcement during her last policy address that Hong Kong would strive to achieve carbon neutrality by 2050 is most welcome. As the Hong Kong Government is expected to update its Climate Action Plan next year with more proactive strategies and measures to reduce carbon emissions, France is committed to enhancing its local cooperation in the area of sustainable development.

Some of the French companies working in Hong Kong are world leaders in sectors such as infrastructure construction (Bouygues, Vinci), transportation (Transdev, Alstom, Thales, ADPI), waste management (Veolia, Suez) or energy efficiency (Schneider Electric) - with technologies and solutions that will contribute to Hong Kong’s transition towards a sustainable smart-city.

As an international financial centre, Hong Kong has a special role to play. Green finance is indeed a key issue in the fight against climate change. The development of the city’s green bond market is very encouraging, with green sovereign bonds issued by the Hong Kong Government reaching US$ 1 billion and total cumulative green bonds arranged in Hong Kong reaching US$26 billion by the end of 2019. With government support and rising interest from the private sector, Hong Kong could rise as a green finance centre for Asia. There is a lot of interest from the French insurance, asset management and banking sectors to accompany this transition, as the Eurozone already represents half of the green finance market globally.

Chief Executive Ho Iat Seng’s announcements during his last policy address in the fields of environmental protection and urban planning are certainly encouraging. Strengthening the city’s resilience to natural disasters - by improving flood control systems for example - will play a significant part in Macau’s adaptation strategy to climate change. The focus put on the development of a smart-city will also contribute to reducing the city’s carbon footprint, notably by increasing the efficiency of its transportation system.

As Macau looks to a greener future, France is committed to enhance its local cooperation in the area of sustainable development. French companies are already making significant contributions in areas such as transportation - Setec and Egis Rail for instance - and water management. In that field, SUEZ and its subsidiary Macau Water recently signed an agreement with the University of Macau to conduct research on marine ecosystems and water treatment technology, to protect the ocean and its biodiversity.

After Beijing’s announcement that China will achieve carbon neutrality by 2060 and President-elect Joe Biden’s promise to reenter the US into the Paris Agreement, the fight against climate change is more than ever, for the international community, a shared objective and a field for joint action.