This year marks the 20th anniversary of Alexandre Yersin Scholarship, which offers excellence scholarship to the best students of Hong Kong and Macau who want to study in France. 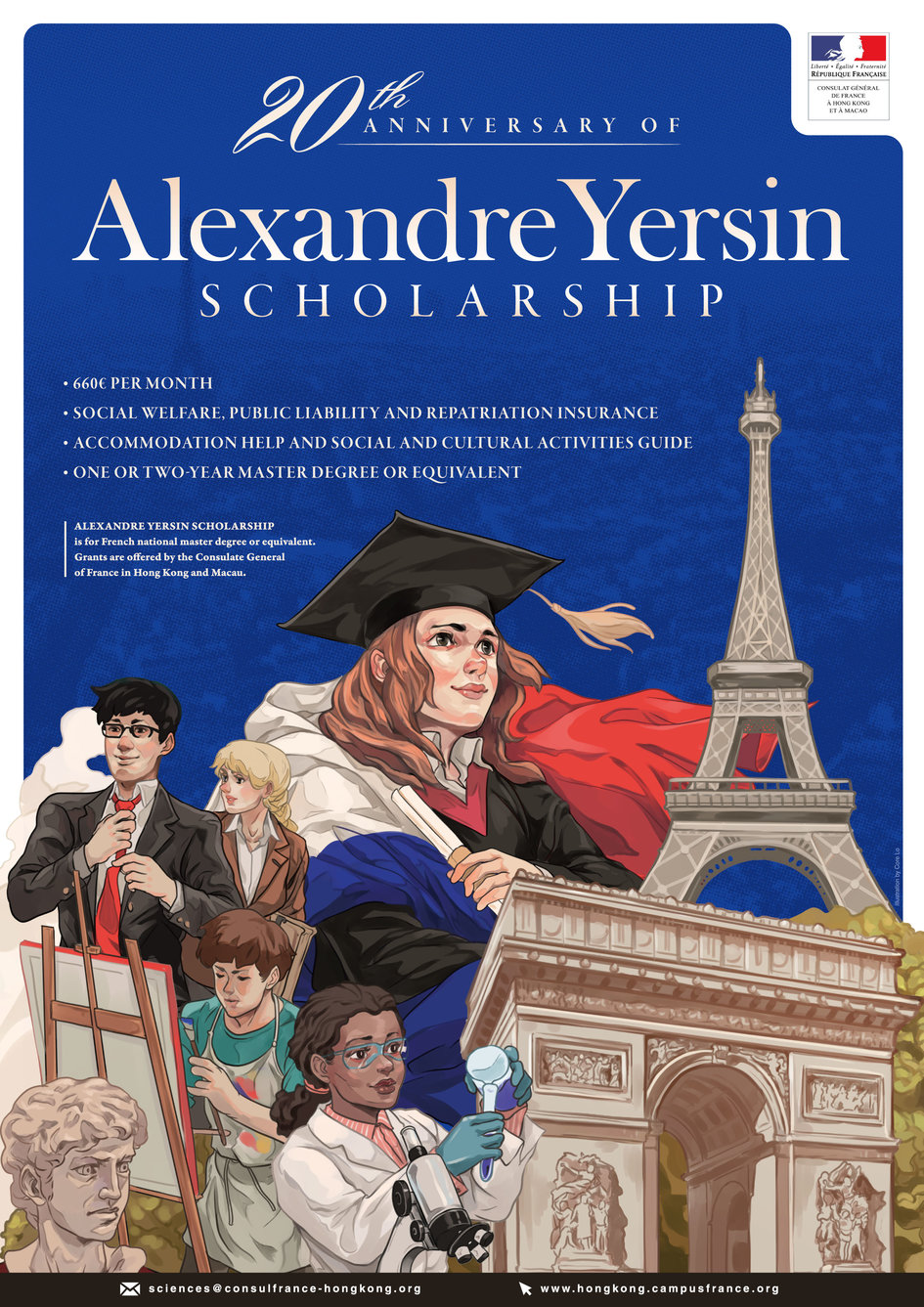 Please contact at sciences@consulfrance-hongkong.org for application details and inquiries.

Grants offered by the Consulate General of France in Hong Kong and Macau : • Living allowance of 660€ per month ; • Social welfare, public liability and repatriation insurance ; • One year of Master 1 or Master 2. To renew your scholarship for M2, a new application is required (Grant period cannot exceed 2 years) • Accommodation help and social and cultural activities guide ; • 50% off for intensive French classes at Alliance Française before departure.

• Hong Kong or Macau permanent resident ; • Not holding French nationality or a dual citizenship including French ; • Planning to get a national Master’s degree or equivalent in France ; • No concurrent scholarships ; • Non french speaking awardees are required to take french classes during their studies in France.

• NOT eligible: PhD students, applicants pursuing short-term programmes (e.g. as trainees or summer courses), or a stay within an exchange program at a French institution.

Application (Deadline 23 April 2020) Documents to be submitted 1. A completed application form 2. CV 3. Transcripts of academic records 4. Previous diplomas (photocopy) 5. Motivation letter (e.g. Why do you want to study/work in France? What are your professional ambitions? etc.) 6. Reference letters (if any)

Over the past 20 years, the Alexandre Yersin Excellence Scholarship has been awarded to the best students in Hong Kong and Macau to pursue a Master’s degree in France. His name was given to this excellence scholarship due to his achievements in science for both France and Hong Kong. Thereby, naming the scholarship after Yersin was a clear symbol of France and Hong Kong’s strong relationship. Alexandre Yersin was a renowned scientist, physician and bacteriologist who made a lot of discoveries and contributed to the development of the Pasteur Institute in the world. Notably, he was sent to Hong Kong in 1894 by both the French government and the Pasteur Institute to investigate the Manchurian pneumonic plague epidemic. In a mere seven days, Yersin discovered the bacteria that was responsible for the Black Death Plague in his makeshift laboratory in Kennedy Town on Hong Kong Island. Yersin’s achievements are an example of the success and excellence in the great history of French science. This is the proof of the diversity that French education can propose and is a mark of France’s long tradition of interdisciplinary excellence. #ChooseFrance!