Written in 1896 during Saint-Saëns’ vacation in Egypt, this virtuosic piece incorporates various exotic elements, taking the audience on a musical voyage to the Far East. Programme also includes Beethoven’s Symphony No 5 and the Hong Kong première of Nostalghia composed by Japan’s foremost composer Toru Takemitsu, featuring Concertmaster James Cuddeford on the violin. 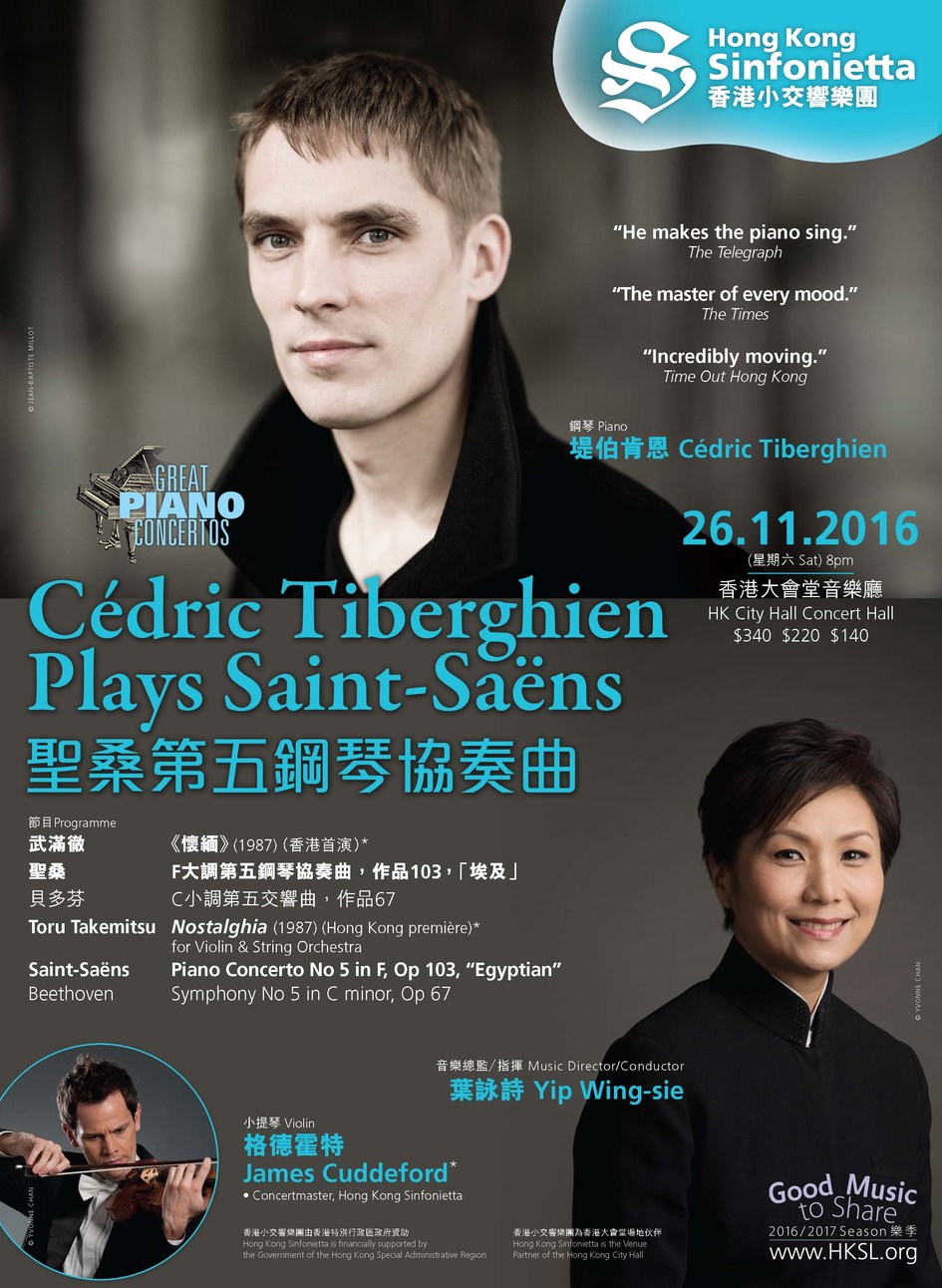 Concertmaster James Cuddeford is a former member of the internationally acclaimed Australian String Quartet and Grainger Quartet. He has performed extensively throughout Europe, Asia and Australia as both soloist and chamber musician, and has appeared at major international festivals and famous halls around the world. Also a highly active and renowned interpreter of contemporary music, Cuddeford has worked with and premiered the music of many of the most important composers of our time, including violin works by Dean, Kurtág, Smalley and Birtwistle.

Highlights of the current season include return projects with Cleveland Orchestra, Hong Kong Sinfonietta, Auckland Philharmonia Orchestra, Tasmanian Symphony Orchestra, BBC Scottish Symphony Orchestra and City of Birmingham Symphony Orchestra; an extensive residency with Orchestre Symphonique de Bretagne which will see Tiberghien direct the orchestra from the piano in concertos by Mozart as well as concerto performances by Saint-Saëns and Mendelssohn, and a chamber project with the orchestral wind principals.

During the 2015/2016 season, Tiberghien presented a major focus on the music of Bartók and his most recent recital disc released on Hyperion in April 2016 is the first in a 3-volume exploration of Bartók’s solo piano works and has been met with critical enthusiasm. His discography also includes Szymanowski’s Etudes and Masques; César Franck’s Symphonic Variations and Les Djinns, with the Liège Royal Philharmonic conducted by François-Xavier Roth; Brahms’s Concerto No 1 with BBC Symphony Orchestra and Jiří Bělohlávek; six recital discs on Harmonia Mundi and numerous chamber music recordings.

Tiberghien studied at the Paris Conservatoire with Frédéric Aguessy and Gérard Frémy and was awarded the Premier Prix in 1992, aged just 17. He was then a prize-winner at several major international piano competitions (Bremen, Dublin, Tel Aviv, Geneva, Milan), culminating with the First Prize at the prestigious Long-Thibaud Competition in Paris in 1998, alongside with five special awards, including the Audience Award and the Orchestra Award.

Currently Concertmaster of the Hong Kong Sinfonietta, James Cuddeford has emerged as one of Australia’s leading musicians, having achieved international recognition as both violinist and composer.

After commencing his musical studies at age seven, Cuddeford won a full scholarship at age 12 to study at the Yehudi Menuhin School in England. He continued his studies in performance at the Royal Northern College of Music and composition at the University of Manchester. His principal teachers were Yehudi Menuhin in violin, and Karlheinz Stockhausen and György Kurtág in composition. He has won a series of important competitions including the first prize in the 1996 Charles Hennen International Competition in Holland.

Cuddeford has performed extensively throughout Europe, Asia and Australia as both soloist and chamber musician. He has frequently appeared at major international festivals in many of the world’s most prestigious halls. As a chamber musician, James has collaborated with artists such as John Lill, Charles Rosen, Stephen Kovacevich, Cristina Ortiz, Michael Collins, Heinz Holliger, Yehudi Menuhin, Bruno Giuranna and Michel Dalberto. He has performed concertos with orchestras including the Camerata Lysy Switzerland, BBC Scottish National, Hong Kong Sinfonietta, Jena Philharmonic Germany, Queensland, Adelaide and Tasmanian Symphony Orchestras.

As a highly active and renowned interpreter of contemporary music, Cuddeford has worked with and premiered the music of many of the most important composers of our time, including violin works by Dean, Kurtág, Smalley and Birtwistle. At age 15, he was the youngest finalist in the BBC Young Composer of the Year, and the following year the Queensland Philharmonic Orchestra commissioned and premiered his first major orchestral work. His compositions have been performed, recorded and broadcast in Europe, North America and Asia by groups such as the Nash Ensemble, Australian String Quartet, Psappha Ensemble, and the Sonos Chamber Orchestra of New York. Recent commissions include works for the Japanese Shakuhachi Grandmaster Akikazu Nakamura, the Sydney Conservatorium of Music “100 Year Celebrations” and Ensemble Offspring.

Cuddeford joined the internationally acclaimed Australian String Quartet in 1998, and was subsequently violinist with the Grainger Quartet and Sydney Soloists. Cuddeford lectured in violin at both the Elder Conservatorium and the Australian Institute of Music, and has given master classes at many major institutions around the world.