The Musée d’Orsay is 25 years old. As the anniversary drew near, the museum was in need of a facelift. The arrangement and lighting of the exhibition spaces in particular have benefited from significant changes. The work involved took a total of two years. 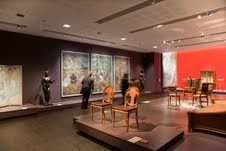 Renovation of the museum had become essential due to an increased number of visitors to the collections and the need to put in place a better organisation of the flow of visitors: now more than three million a year. It had become necessary to restore fluidity and coherence to the museum. The significant amount of work carried out made it possible to review the presentation of the works of art as a whole, and the logic of visitor circulation. The new route is based on a clearer separation between Impressionism and Post-Impressionism.

One of the main purposes of the renovation was to present the most recent advances in art history, to suggest new connections and to restore the museum’s polyphony, among the movements, techniques and different arts that were at the core of its original purpose. It also involved strengthening the dialogue between painting and sculpture, by putting the graphic arts back in their rightful place, in resonance with all the museum’s collections. The former Salle des colonnes, entirely dismantled, has released an area of around five hundred square metres that can now host two or three medium-sized exhibitions per year. More intimate spaces have been created on either side of this large gallery, suitable for the presentation of the museum’s collection of graphic art or used to extend the area of temporary exhibitions.

One of the major innovations in the presentation of the artworks is the installation of the most up-to-date lighting, which reproduces natural light almost to perfection, but in a directional way. The result brings out the chromatic richness of the works in an entirely new way. This gives us the opportunity to rediscover paintings; for example the headdresses of the women in Van Gogh’s The Dance Hall in Arles, which looked black, turned out to be an intense blue. For Impressionism in general the effect is dazzling in the revelation of colours.

White has a deadening effect on all painting, apart from the art of the 20th century and contemporary art. When an academic or Impressionist painting is placed against a white background, the radiance of the white and its halo of uncertainty around the work prevent the contrasts from being revealed. Progressively, since 2008, the Musée d’Orsay has revived the principle of the coloured wall, testing a range of colours. A painting by Courbet or a canvas by Manet require different backgrounds to Impressionist painting, both lighter and more cursive. Moreover, the visual and enhancing function of gilded frames, notably the frames used for Salon paintings, comes back into its own against a coloured background. The new galleries therefore comply with this new thinking, bringing warmth and elegance to the picture galleries.

The redesign of 2000 m2 of the Pavillon Amont was entrusted to architect Dominique Brard and his team at the Atelier de l’Ile. It is part of the overall programme to reshape the museum spaces conducted by the Musée d’Orsay, with the main aim of providing a functional layout that allows visitors to move smoothly through the museum. To do this each floor has been reorganised in its structure and volume in order to simplify complex spaces and transform them into genuine exhibition galleries. The project has been designed by integrating and intersecting several elements: enlarging the floor areas, providing new simple methods of getting from one floor to another that are easy to understand and with better dimensions (stairs and lifts), augmenting and controlling the natural lighting (large overhead windows) and museum galleries with simple dimensions, to serve the artworks on display, well-lit and in a striking colourful ambience.

The redesign of the galleries on the 5th floor, entrusted to architects Wilmotte & Associés, concerns an area of over 2000 m2. It involves reorganisation of the former salle des colonnes, redesign of the Impressionist gallery and the adjacent small rooms dedicated to the graphic arts as well as renovation of the Galerie Françoise Cachin, including the terrace on the middle floor and the Symbolist gallery. The introduction of deep, dark colours to the picture rails, as well as the installation of a floor, provide a setting in which people can now see the colourful subtleties of the Impressionist paintings. The lighting installation has been revised by the architect and his team in order to insert artificial lighting, adjustable according to the daylight, combined with filtered natural light in the majority of spaces.

Finally the Café de l’Horloge has been entirely redesigned by Brazilian designers Fernando and Humberto Campana, some of whose works, highly prized by collectors, are now to be found in the Museum of Modern Art in New York. Today in the Café de l’Horloge, nothing is left of the outmoded bourgeois comfort of the Parisian bistro: no more red velvet, no more mahogany, no more brass knobs. The two architects have opted instead for metal wires, bursts of acrylic and strips of gilded aluminium.