Home > Culture, Education and Science > News > Research and Higher Education > A prestigious mark of distinction for the magazine “China Perspectives”

A prestigious mark of distinction for the magazine “China Perspectives” [fr]

This indexing consecrates the long-term work carried out by the CEFC for the recognition of its quarterly review published in French since 1994 and in English since 1997. To this day, China Perspectives is the only review published by a public research institute jointly supervised by the Ministry of Foreign and European Affairs and the National Center for Scientific Research (CNRS) that is indexed in the very restricted Social Sciences Citation Index database. Such an achievement illustrates and promotes the excellence of French scientific research, alongside other French academic journals, such as the Acts of Research in Social Sciences or the French Journal of sociology (Ophrys).

Based in Hong Kong, the CEFC is a public research institution. Its mission is to study political, economic, social and cultural changes in the People’s Republic of China, Taiwan, Hong Kong and Macao. CEFC is in direct contact with the Chinese academic and intellectual sphere thanks to partnerships with local institutions in Hong Kong, Taiwan and mainland China. 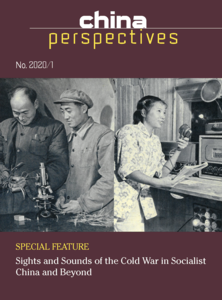 The first issue of 2020, entitled "Images and sounds of the cold war in socialist China and beyond", will focus on the cultural imagination of the Cold War in the People’s Republic of China, a field of research which has been booming in recent years. Edited by Letty Chen (University of Washington), this issue offers original contributions on the multiple ways of how the context of the Cold War reconfigured fields such as dance, cinema, and science in China in the 1950s and 60s. Breaking from the classic binary vision of the Cold War, the publication thus rethinks this conflict as a war of representation and points of views, through the study of culture, and scientific and technological equipment of the time.

To know more about the CEFC : https://www.cefc.com.hk