Home > The Consulate General > News > Consulate news > A French company is bridging the gap between Vladivostok and Russky (...) 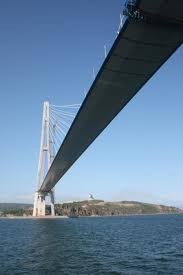 Russky Bridge links Russky Island to Vladivostok, right on the borders of the Russian Far East, and is one of the longest cable-stayed bridges in the world. The gigantic bridge, built using the know-how of a French company, has just opened. As a national showcase for the Russian authorities, it was essential that the bridge was finished ahead of the Asia-Pacific Economic Cooperation summit attended by 21 countries, to be held on Russky Island in September.

Bridges of this kind are held by a series of stays – sets of steel cables designed to support the structure and spread the load evenly. Each stay is fixed to a pylon and to the bridge deck on the other side. Russky Bridge is 1,872 m long in total. It holds the record for the longest cable-stayed run or span – i.e. the distance between the two huge pylons that support the bridge – in the world: 1104 metres. The previous record was held by the bridge in Sutong in China, with a cable-stayed span of 1088 metres. The 168 stays used to accomplish such a feat in Vladivostok measure between 136 and 582 metres. As a result, the bridge holds the record for the longest cable-stayed bridge in the world! The stays themselves had to be specially designed to withstand temperatures of between - 40°C and + 65°C.

The majestic bridge was built by the Russian industrial group USK Most. The stays, which are the masterpiece of the whole structure, were manufactured and installed by French workers from the company Freyssinet, a subsidiary of the Vinci group. The budget for the project was €850 million, including €60 million for the stays produced by Freyssinet.

Freyssinet was created in 1928 by Eugène Freyssinet, an engineering graduate from the Ecole Polytechnique and the Ecole nationale des Ponts et Chaussées, two prestigious French engineering schools. He invented and patented prestressed concrete, which was to revolutionise the construction industry. In 1976, to signal its international focus and pay tribute to the man whose work it was continuing, the company became Freyssinet International and built numerous cable-stayed bridges including the one in Tampico, Mexico. Jérôme Stubler, Managing Director of Freyssinet, explains what happened next: “Over 20 years ago we introduced a major innovation: cable-stay technology using individually protected, multiple strands. The new development was launched throughout the world and helped us to become the global leader in cable-stayed bridges. Instead of having steel ropes pulled taut in a single envelope, each rope is protected in its own individual envelope. That offers significant improvements in terms of protection from corrosion. It also makes the bridge safer and gives it a greater ability to withstand any incidents.” The Vladivostok bridge uses stays with individually protected ropes; amongst other things they help it to withstand the region’s particularly strong winds.

The company has regained the world record for cable-stayed bridges, which it secured in 1995 with the Normandy Bridge. As Jérôme Stubler explains, “The Normandy Bridge was the launch pad for this technology. Since the early 2000s, the same idea has been copied and often badly copied [...] but we have introduced new concepts to ensure we stay ahead of the game: for example, more flexible cable systems that are more resistant to distortion, less vulnerability to wind thanks to a better shock absorption system, and so on.” With almost 6,000 staff, Freyssinet is the world leader in its sector and currently has a 75% market share, excluding China. The company’s technological advance and know-how have long been recognised for building some of the longest cable-stayed bridges in the world.

As Freyssinet’s Managing Director explains, “Most of the time the anchoring systems and shock absorbers are produced in a factory in France.” Freyssinet sent a team of 45 people on-site to build the Vladivostok Bridge. Three hundred Russian workers trained by the French firm also worked on installing the stays. For eight months, the team worked in extreme climatic conditions, with temperatures dropping as low as - 25°C. The majestic Russky Bridge was opened in July in the presence of the Russian Prime Minister.

So what new records are likely to be broken by cable-stayed bridges in the future? According to Jérôme Stubler, “A span of 1500 metres is possible.” He points out, however, that “the market for Freyssinet consists of bridges with a span of 300 to 500 metres.” Freyssinet has a presence on every continent and is currently working on numerous projects in the United States, Canada, Russia, Korea, Mexico, Indonesia, Great Britain and Turkey. Lucie de la Héronnière